#BullardBond2022 has two propositions on the ballot: Prop A for $82 million and Prop B for $21 million. In this video, Superintendent Dr. Jack Lee discusses each proposition.

The School District sets the tax rate, but the County Appraisal District sets property VALUES. Since 2018, the District has lowered the total tax rate by 31 cents.

Why not use M&O funds to pay for capital projects? Salaries and Benefits make up the majority of the district’s M&O budget leaving very little to put toward capital projects. Additionally, as property tax values rise, the state reduces- or compresses- the amount of M&O funding the district receives. However, the district is able to utilize every bond dollar.

Bullard Bond 2022 is broken into two separate propositions: Proposition A totaling $82 million and Proposition B totaling $21 million. If approved by voters, the tax rate impact would be an estimated $4.79 for a $100,000 valuation, depending on the timing of the sale of bonds. Once bonds are authorized by voters they are sold in increments as needed to fund the projects. The tax impact could also be less than projected if the district’s tax base grows more than anticipated and/or a lower interest rate is secured.

Paying Down Debt: Bullard ISD has a solid debt repayment plan with a maximum debt maturity of 30 years. Bullard ISD has taken advantage of Bond refinancing opportunities and has completed five refundings since 2011. Additionally, the district has pre-paid two bonds prior to maturity, resulting in more than $6 million dollars in combined savings.

As a result of the district’s financial standings, Bullard ISD earned a rating of Superior Achievement in the Financial Integrity Rating System of Texas, the state’s financial accountability system. 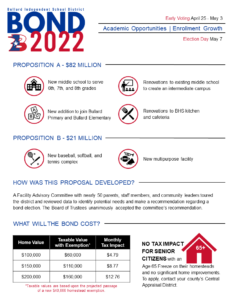